You are here: Home › For Love of Chocolate
By mariapacinifazzi on 25 Febbraio 2014 in Traditional Italian Recipes 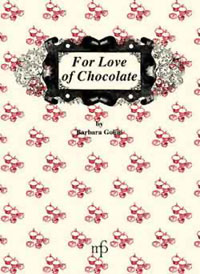 I first ventured into the world of chocolate pushed by greed but then went on through curiosity: why not try and make chocolates or Easter eggs with presents in them for children?

When I’d bought my first shape for an Easter egg, I still only had the vaguest idea what to do. So I took Cordon Bleu lessons to learn how to work with chocolate and then went to the Eurochocolate Fair in Perugia, and took courses with famous chocolatiers such as Paul de Bondt and Gererd Ronay, and Catinari in Agliana.

I thank each on of them for having enriched my store of knowledge on chocolate. But let us not forget that I am still just an enthusiastic amateur of that grand little seed, cacao, who is happy to communicate its sweet secrets to anyone interested.

Chocolate, that spicy drink of the pre-Columbian populations, a direct descendant of cacao, disembarked in Europe after sailing the oceans on the ships of the Spanish Conquistadores without a break and it has never stopped moving forward through the centuries ever since!

This invigorating hot drink was sipped in the Courts of Europe. For a long time it was considered the preserve of the top echelons of society: ladies, knights, the clergy. It will take a long time before it develops into a chocolate bar! But its progress has never stopped and neither has the uses to which it has been put, from Italian pasta to bath foam and last but not least, to body massage.

Chocolate is nourishing, it is energising, it is rich in fats, minerals and vitamins. It contains theobromine, a substance almost as stimulating as caffeine. More interesting is the fact that it contains phenyl ethylamine, a substance that brings on a slight feeling of euphoria, making you want chocolate when you are down and stressed.

A Taste of Tuscany
Cooking with olive oil