You are here: Home › Jan Van Eyck’s Stolen Identity: The intrusion of the Arnolfini family in the London Double Portrait
By mariapacinifazzi on 23 Febbraio 2018 in BOOKS 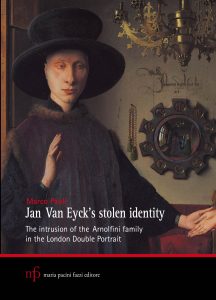 The volume focuses on the thesis that the painting does not depict, as is commonly believed, the spouses Arnolfini, but the painter Jan Van Eyck and his wife Margaretha; a self-portrait that celebrates the birth of their first male son in 1434. On the other hand, in support of traditional identification, there is only the phonetic similarity between the surname Arnolfini and the name ‘Hernoul le Fin’ with which man depicted in the painting is recorded in the Inventory of Margherita d’Austria (1516). But the creator of the inventory had to be fooled by the apparent content of the scene (a much younger pregnant wife of her husband, probably lover on the doorstep of the room) and the allusive signature of the entry of a stranger in the thalamus (“Jan Van Eyck fuit hic “), believing that the painting represented the allegory of the betrayed husband, of the ‘cocu’, in the Franco-Flemish popular culture of the time symbolized by the figure of Arnolfo, the ‘Hernoul’ in fact. It is therefore only for a case that in the nineteenth century Crowe and Cavalcaselle associated the surname Arnolfini to the inventory of 1516.
The painting is inspired by Roman de la Rose, the famous novel still in vogue at Van Eyck’s time, telling the story of a girl’s (actually her sex, ‘pink’) conquest by her lover which, in order to succeed in the intent, must become a pilgrim. This explains the austere man’s dress and headgear that reminds the pilgrim’s clothing, and finally explains the exceptional signature of the painter exemplified on the graffiti that were left in the shrines during pilgrimages to witness the just passing through. Van Eyck, imitating the protagonist of the novel, celebrates his love for Margaretha and the resulting birth of the firstborn male, behaving like a pilgrim in the face of the relic (in Roman de la Rose the female sex is in fact compared to a relic).