You are here: Home › On Lucca Time. The Torre delle Ore and its clock
By mariapacinifazzi on 6 Marzo 2017 in Foreign Languages 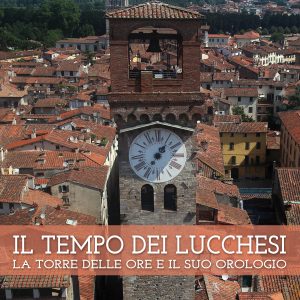 Lucca’s towers, a common medieval architectural feature, became a representation of power and wealth, multiplying over the centuries until Lucca could count more than a hundred.
The city’s towers stood as a symbol of the power of the commons over the noble families, and their bells punctuated the moments of everyday life of Lucca’s citizens—at times complementing the ringing of the church bells and at times in counterpoint to them.
The Torre delle Ore was acquired by the Repubblic of Lucca through a series of transactions overseen by the Guinigi family beginning at the end of the 14th century. From that time forward, the Torre delle Ore has been one of Lucca’s most recognizable symbols just as, since 1300, the Torre delle Ore’s clock has been an inseparable feature of the tower. The clockworks have been replaced numerous times, but the tower and its turret clock have remained a significant landmark in a city that has, throughout its history, made “libertas” an element of its strength and diversity.
Too much time has passed since Lucca’s citizens have been able to hear the tolling of the clock’s grand bell. After many years, restauration efforts by Lucca’s Opera delle Mura Agency, which manages the tower, have been completed, thanks to a fundamental contibution by the Rotary Club of Lucca. The Torre delle Ore and its clock are reborn, and they will once more mark the moments and the hours of the daily lives of Lucca’s people, today more than ever distracted by “noise” of so many other kinds.
The clockworks is the heart of the tower, and its incarnations over time have been the work of craftsmen both local, as was Labruccio Cerlotti, and from abroad, as was the Geneva-born Louis Simon. But their nationalities have never been more than an interesting historical detail. In the end, it is the voice of the City of Lucca that now makes itself heard once more.